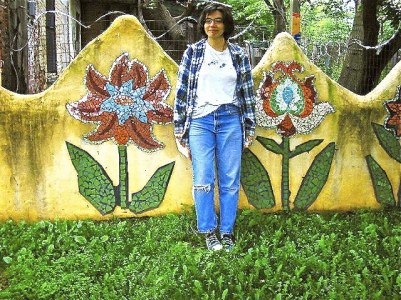 I spent my childhood roaming the fields and woods surrounding the farmhouse where I grew up. It was a sensual experience: the rough bark of the ancient apple trees I climbed, the strong scent of pine, the fleeting gold of the trees in early autumn light, dancing flames of colour in the night sky, running into the wind of an impending storm, the startling cold at the bottom of a nearby lake. Though I have left my hometown in Maine, the sensations I experienced remain with me and are a big influence in my work. I now live and work in Portland, Maine, a great city with a strong artistic community only minutes from woods and ocean.

My individual work is balanced with work outside the studio making art with people in the community where I live. Other pages on this website contain some thoughts about the different themes I am pursuing in my work; I will focus here on how working in community has changed how I think about art (its purpose, the process of making it) and influenced the direction of my work.

I served as the Director for the Art in Service program at the Maine College of Art, where I had earned a degree, and worked closely with students, local schools, non-profit organizations, and faculty as I mentored students who were working as artists in the community. Through this I discovered SPIRAL Arts, INC., an innovative, spiritually based (non-denominational) community arts organization. SPIRAL Arts has forever changed my life, as it has for hundreds of others. As I teach and work along side Portlanders of all ages and backgrounds with SPIRAL Arts, I have the privilege of witnessing the transformative power that making art can have in people’s lives. It is healing for the spirit and the body alike and, because it can help open people’s hearts, creates something profoundly positive in the world that is beyond words.

Observing this led me to conduct a more focused exploration of art as a means of healing, transformation, connection with the spirit, and of building community with SPIRAL Arts. They included me in a team studying the role of spirituality in community building and social justice issues at the Urban Theological Unit in Sheffield, England. I learned a great deal about the importance of listening and walking along side people , working with them to fill real needs they identify. While in England we visited Welfare State International in Yorkshire, an innovative arts organization created and run by artists very much concerned with empowering people and social justice issues (it has since been reborn into a different organization with similar sensibilities). WSI sparked a deep interest in the power and beauty of creating rituals honoring important events in one’s life and within a community. I have incorporated that into my community work as well as the individual work I do, whether it is paintings, installations, shrines, or work honoring specific people, places or events. 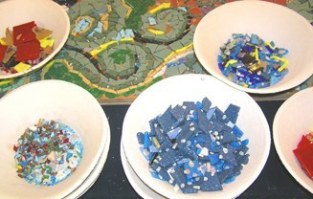 For five years I was one of many artists involved in the Mosaic Of Hope Project, a joint venture between SPIRAL Arts and a local community organization to create the largest community-designed-and-made exterior mosaic mural in the state at the Parkside Community Center in Portland. To learn how to do this, we visited the Village of Arts and Humanities (founded by artist Lily Yeh) in a Philadelphia neighborhood where she and a growing number of people living there have transformed, or perhaps re-envisioned, a community that had suffered greatly from poverty and all that accompanies it. Working together, once-abandoned buildings have been turned into beautiful homes, mosaic and painted murals line the streets, children climb on the backs of whimsical creatures in parks that were once dangerous vacant lots, and people grow their own vegetables in community gardens. With the team, I learned how to make large scale mosaic murals from Big Man, one of the first people in the community to work with Lily Yeh. He was a leader in the neighborhood, an expert in making mosaic tile murals, and a very kind man who had a lot to teach us on many levels.

I was also one of a team of SPIRAL Arts artists who worked with staff, children and families at the Barbara Bush Children’s Center at Maine Medical Center to create clay tiles for 3 large murals now installed in the hospital. The tiles created for the murals became a means of communicating encouragement for all current and future young patients, families, and the staff. Foot and hand prints of babies who were very ill, tiles painted with images full of colour and life, and words of hope filled the murals. It was a very moving experience and continues to be, for when I visit the murals I often see a parent comforting a child by looking at and touching the tiles together.

So it is the potential for transformation and healing in creating and viewing art that interests me, as well as its potential to be an intersection between the sacred and the profane, the spiritual and the sensual. I think I will be exploring this the rest of my life. 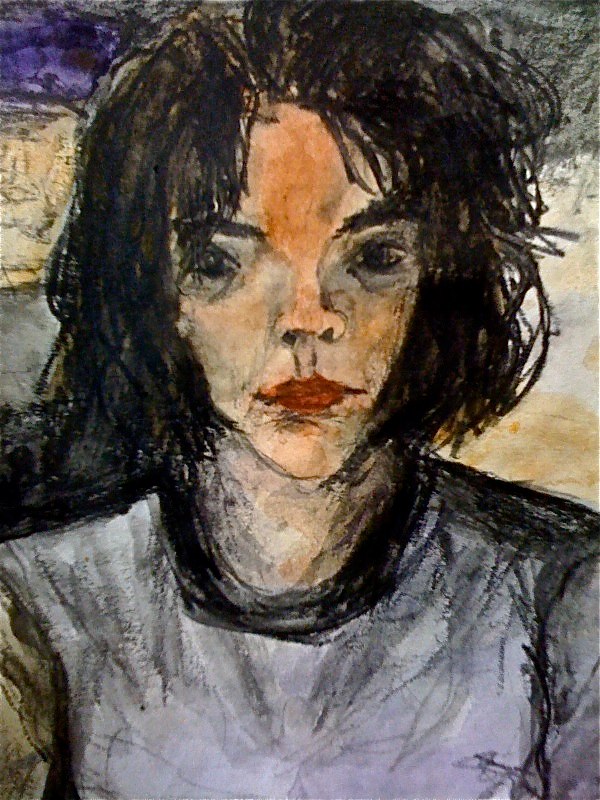 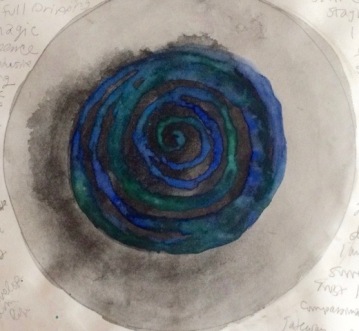 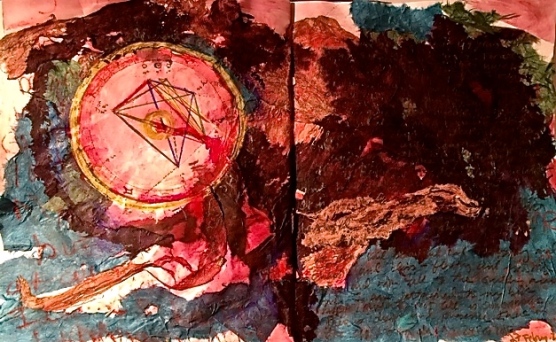 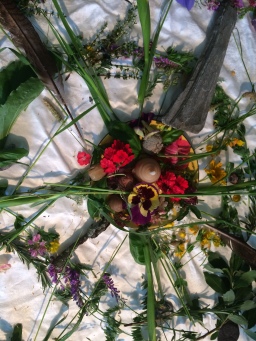 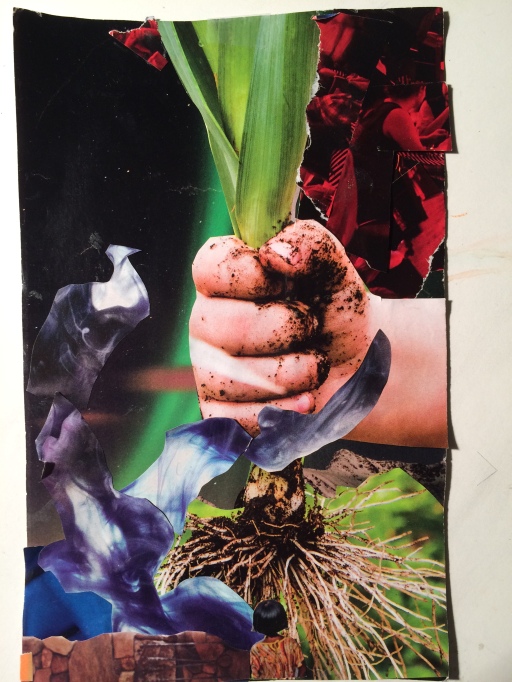 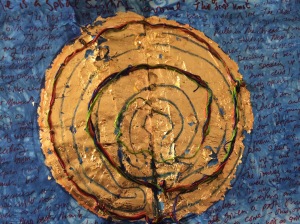 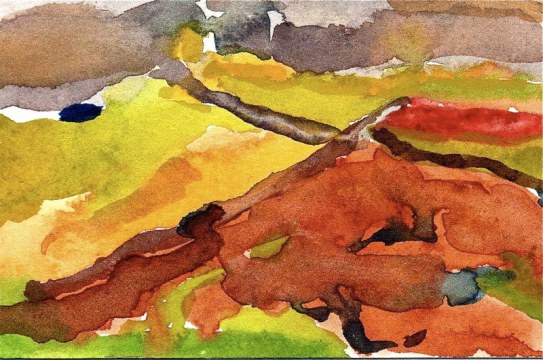 Paintings of places I love. This is a sampling of small watercolours done on-the-spot as I travel. Paintings of: Utah, Colorado, Yorkshire, Tuscany, Prince Edward Island, and Maine…

“Goddamn everything but the circus.” -Frederico Fellini 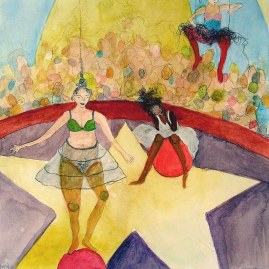 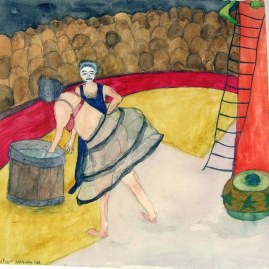 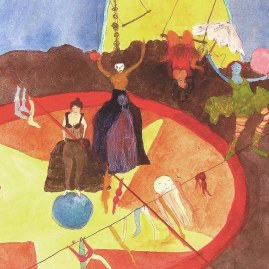 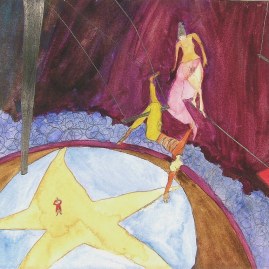 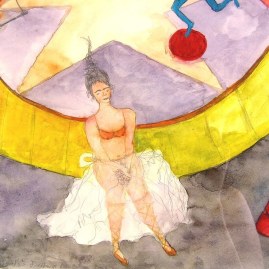 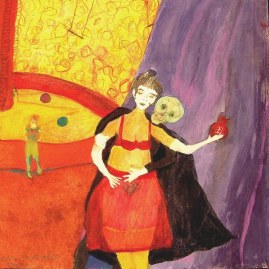 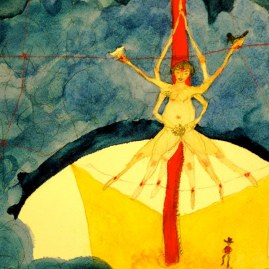 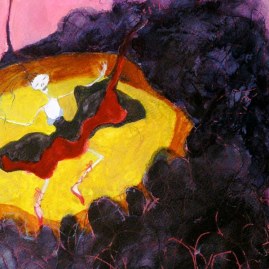 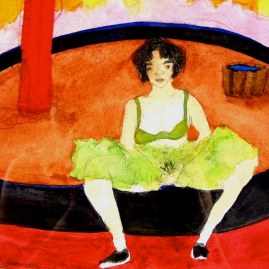 As a child, going to the the circus was both thrilling and disquieting. Although I did not have the language for it at the time, I was aware that it was an arena for the sacred and profane in life to meet. We in the crowd were both witnesses and voyeurs, eating cotton candy and restlessly demanding more and more of the performers entertaining us. We could never get enough, for the circus performers seemed to have something that we lacked. They were free and vulnerable as they flew and tumbled beyond the restrictions of gravity and society, beautiful beyond belief, sometimes possessing a terrible beauty. Yet like the animals they kept, their beauty and freedom from convention was carefully confined to the small world of the tent. Outside, the performers became invisible or, if seen, were often avoided as unseemly or freakish. Yet for those moments in the ring the performers were transformed– they were free.  This, in turn, freed me. It was many years later before I finally ran away to the circus.

Like a three-ring circus, the series shows fragments of moments that connect with one another in various ways but evade forming one distinct narrative.

These paintings of an Italian circus are all on paper, approx. 8″ X 7″ and are framed. Because they would ideally be seen together, they will be made into a limited edition artist’s book (2019 release).

About the series, dea (goddess)

Most of my work is an exploration of the intersection of the sacred and the physical world. In this new body of work, I am exploring ancient goddess figures and their power to represent- or hold-–the power of the feminine divine. What makes them, or any object, sacred? Is it intention? Does it depend on the context it is in? On those viewing it? And what is the connection between art, the sacred, and healing?

I have always responded to the simple beauty and power of small prehistoric goddess figures, but it was not until a friend of mine became ill that I felt compelled to create similar forms myself. I made the first ones out of a desperate desire to create something that my friend, an artist who was a great inspiration to me, might find healing (I suppose in my magical thinking I wanted what I made to cure her, of course, and only later could really appreciate the difference between healing and curing). Just as important, creating something for her was the only way I could articulate how much she meant to me, and was a means of counter-balancing, if only in a small way, the destruction of her body by cancer.

I did not start out to make goddess figures- they just kept appearing and seemed to feel right. The figures were very simple, based on drawings and photographs I had seen of ancient goddess figurines. It was not just the forms, but the intention with which they were made and the powerful use of symbols that were particularly important to me. The figures I made contained pomegranate seeds, a sensual, ripe representation of the womb and the feminine (I did not think of their link with Persephone and the cycle of life then, but do now), as well as seeds from hollyhocks and lupine taken from places important to me. I made the figures small and smooth enough to be held in the hand and rubbed. While making them, I thought of my friend. I gave her one of the goddess figures while I kept the other.

Years after she died, I brought this sister piece with me on a trip to Katahdin, a sacred mountain in Maine, on impulse. As I hiked with the 11 other women I was with, I searched for a place to release the goddess figure in my friend’s honor, as she would have appreciated the mountain’s wild beauty. I only knew two of my companions well, so thought that I would conduct my simple ceremony alone or just with them. This made perfect sense, but it did not feel right to me. So, by the time we were hiking down the mountain, I had shyly and reluctantly followed the impulse to invite anyone who wanted to join in the ceremony to do so. Taking that risk, and letting go of control of what I thought the ceremony “should” be, led to one of the most important and moving experiences I have had.

Everyone participated, not knowing exactly what to expect. We each took a turn holding the goddess figure and, either silently or aloud, remembered and honored someone in our lives whom we loved and missed. As each person spoke, everyone else focused their full attention on the speaker with a strong, supportive energy that was palpable– we were present with one another. In fact. one person chose to participate by listening. When we lowered the figure into her mossy, womb-like crevice, I felt something heavy lift from me. I had finally let my friend go, not realizing I had been holding on so tightly; I also felt the power of what we had all shared, and the presence of grace in the experience. The risk of opening ourselves– our hearts– to others made the experience profoundly powerful. The figure provided an opportunity for us to focus thoughts and served as a vessel to hold our memories and love for the person we remembered.

I have continued to make goddess figures. They continue to draw on ancient forms and include materials and designs that have both personal and symbolic meaning. For me, they offer another way to explore art and healing, the divine and the feminine, and vessels that can help bring both into awareness. Whether they have particular meaning outside of a personal context and experience of them is still uncertain to me, but that is also part of the exploration. 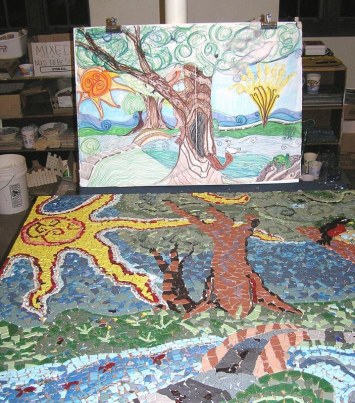 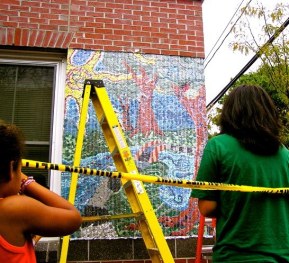 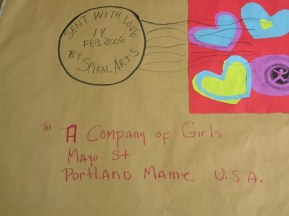 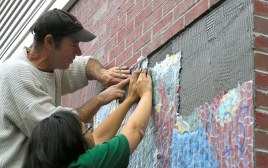 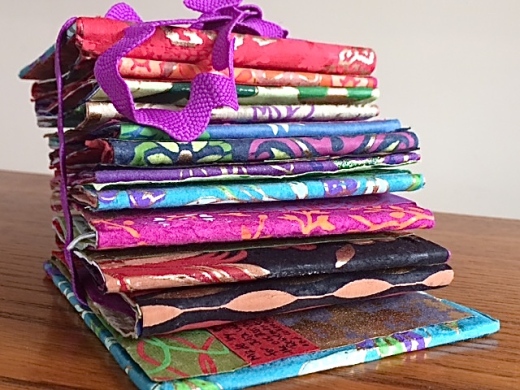 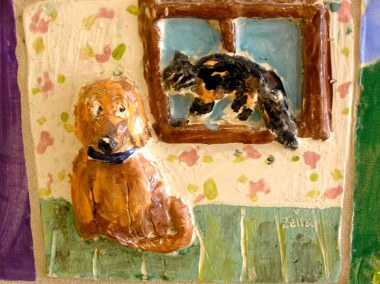 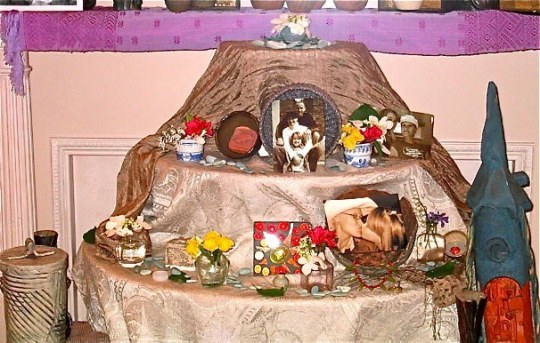 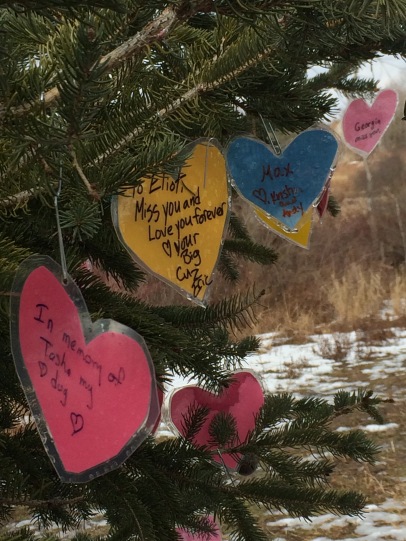 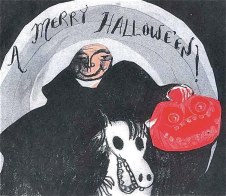 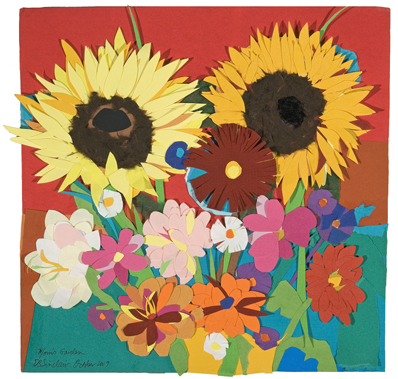 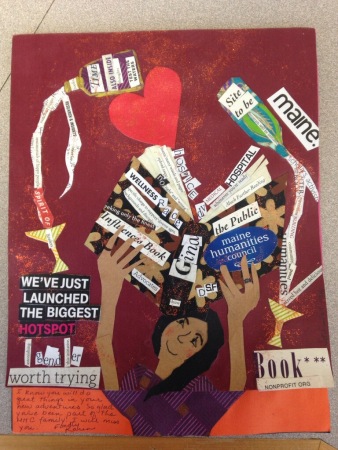 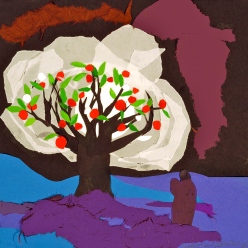 Each card is blank inside & comes with a matching envelope. Please order 2 months in advance to insure that you receive your cards in plenty of time (particularly if you need them for holidays).